Working Together to Prevent Suicide 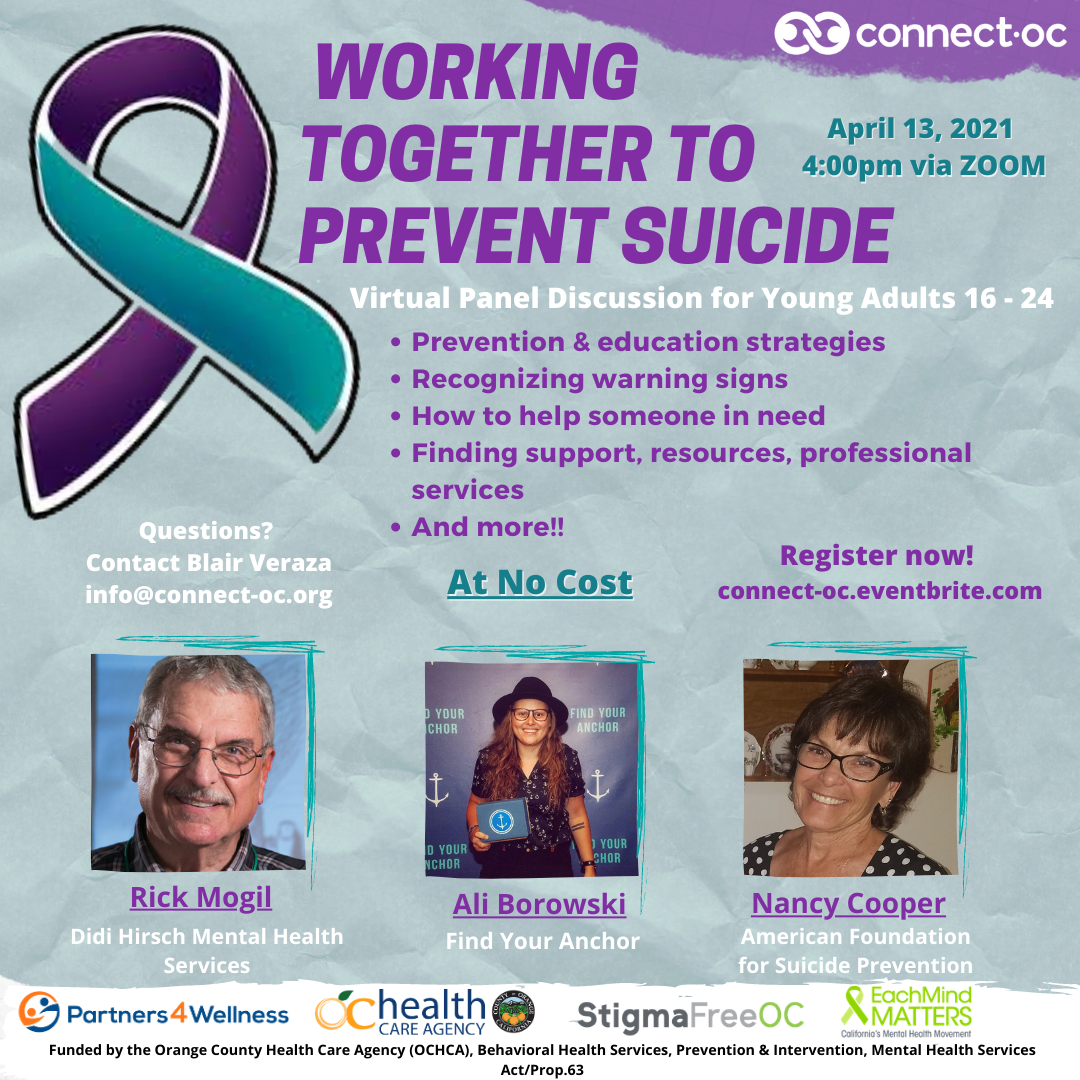 This webinar will be held via ZOOM.  Registration is reguired to reciev the Zoom link.

Partners4Wellness is the lead agency for Connect-OC. Since 1957, the agency has been a leader in preventing substance use and mental illness in young people. Providing educational programs and resources. Building collaborative partnerships. And creating healthier communities.

Those who complete a survey will be entered to win an Amazon gift card!

Join the Connect-OC Coalition for a panel discussion on suicide prevention; we'll be discussing:

We have an incredible panel of speakers, including:

Rick Mogil - Didi Hirsch Mental Health Services, Rick is a survivor of his younger brother Ed’s suicide, which occurred in 2003. He is currently the Program Director for Suicide Bereavement Services programs at Didi Hirsch Mental Health Services. Rick has provided suicide prevention training and information since 2005 to law enforcement, educational institutions, religious organizations, and other community entities. Rick is a registered trainer for safeTALK (suicide awareness for everyone) and a Bronze Master trainer for ASIST (Applied Suicide Intervention Skills Training), both of which are evidence based trainings provided by LivingWorks Education (livingworks.net).

Ali Borowski - Find Your Anchor, Ali is the Founder and CEO of Find Your Anchor, a grassroots movement aimed at suicide prevention and awareness. She is an experienced graphic designer who made a name for herself in Chicago as the Design Lead for the NHL Winter Classic and Stadium Series, before fleeing the winter for Southern California. Armed to the teeth with pens, sketchbooks, and kazoos, she lives and breathes good fonts, big waves, and long walks down art store aisles. For years, Ali has enjoyed playing outside center on the rugby pitch, and often drives across the country for games, carnivals and sometimes just because the wind is blowing.

Nancy Cooper - American Foundation for Suicide Prevention, Nancy is the current chair of the Orange County Chapter of the American Foundation for Suicide Prevention (AFSP). Nancy's son Geoff died by suicide over twenty years ago. It was ten years after his death that Nancy was introduced to AFSP. Nancy was traveling from Orange County to San Diego to volunteer at the Out of the Darkness Community Walks. It was there that she found out that there was a group of people trying to form a chapter in Orange County. She met up with them and in 2014 they formed the local Orange County chapter. It was then that Nancy decided to turn Geoff's death into a positive by donating her time to suicide prevention. Nancy am very proud to be part of such a vital organization, and to work towards saving lives & bringing hope to those impacted by suicide.

Take our 3-minute survey to help ensure we are meeting your needs and can continue to obtain grant funding critical to maintaining our services.
Leave us feedback